Why the Chinese government is not going anywhere 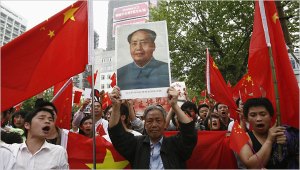 I heard someone ask today why the possibly 180,000-and-rising protests every year in China do not bring down the regime like they are doing in the Middle East. Here is my take.

First, protests in China are usually not against the regime. They tend to be against a crooked local politician. The book Will the Boat Sink the Water?: The Life of China’s Peasants illustrates decently, if anecdotally, the blatant corruption and brutal repression of the Chinese Communist Party (CCP)’s local elites. Most of China’s protests and riots occur at a local level, for local reasons. The reason we see demonstrations against, say, Japanese claims to the Senkaku or Diaoyu Islands on the news is that they are the exception. In fact, the Chinese government has usually been able to exploit popular discontent and direct it toward Japan (unlike Arab governments’ unconvincing blame tossed at the US and Israel), which means that the enemy is not the Chinese government but the Japanese government.

Second, the Chinese media wear a muzzle. News outlets played down or failed to report the protests in Egypt, and websites blocked keyword searches for “Egypt”. Naturally, they could not simply say nothing at all was happening, and as such, the state-run media towed the line it always has, that the violence is due to trying to implant democracy where it does not belong, and that all the Chinese people really want anyway is stability. Given that internet censors in China have in the past shut down Facebook, Twitter and the other online tools that have notably helped many protesters organise, they will not hesitate to do so again if Chinese citizens appear to be doing the same.

For the third reason protests will not bring down the Chinese government, you may first want to read this article. In it, Professor Joshua Tucker makes the point that, while we tend to focus on “the dictator”, dictatorships, like all governments, are more of a coalition of elites that support the guys at the top. If, say, the businesspeople and intelligence services decide their interests are better served deserting the government, they will do so. The CCP is an enormous collection of politicos, businesspeople, bureaucrats and military men, all of whom win money and face by being associated with the upper echelons, and few of whom have any reason to side with anti-government protesters. The government is very effective at co-opting various segments of society, and now comprises businesspeople and intellectuals, along with the usual suspects. The upper class is thus very happy with the status quo.

Finally, a large part of the middle class likes the government because they consider it responsible for the growth in wealth and basic stability they have experienced over the past generation. People often vent their rage publicly when the economy diminishes, and indeed is a major reason for the current anti-government riots; the Chinese economy, on the other hand, continues to grow (albeit unevenly). The young urbanites who participated in China’s 1989 anti-government protests have grown up and moved on. China’s population has aged somewhat since then, and a younger population usually means more popular outrage (including in the current Middle East protests). The middle class, too, would probably need to be won over before anyone could bring down China’s government, and most of it will not be. In short, an Egypt-like takedown of the Chinese government is not going to happen any time soon.

One Response to “Why the Chinese government is not going anywhere”