If you want to help Haiti, open the border 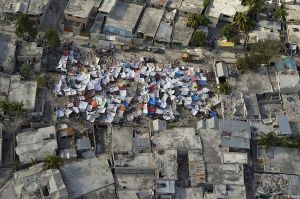 The unfortunate nation of Haiti has still not recovered from the earthquake it suffered six months ago today. It has the marginal good luck of remaining in the news, albeit somewhere between stories of cats getting caught up trees. Many people have pledged their twenty dollars or what have you. However, if we are serious about helping Haitian people, we should let them leave.

Beside the over 200,000 dead and 300,000 injured in the quake, some one million people were left homeless. Haiti’s president Rene Preval said in the aftermath, “wipe away your tears to rebuild Haiti”; and the world said, Yes, we shall rebuild Haiti. Governments who have pledged aid to Haiti are behind in their commitments. The US government has delivered 2% of the aid it promised. Rebuilding, apparently, is not at the top of Barack’s priorities.

But perhaps rebuilding is not the solution for a failed state. Should we rebuild it so the same corrupt people can remain in power? So that deforestation can continue–if there are, indeed, any trees left? So that structural poverty and rampant crime are allowed to flourish? Surely “rebuilding” should mean “recreating”.

One easier and cheaper way to solve Haiti’s problems is to let its people come to the rich world. There are two compelling reasons to think this solution is worth considering. First, for the self-interested, immigration is a great way to increase wealth and economic power wherever it is introduced. According to estimates cited in the book Let Their People Come by Lant Pritchett and the Center for Global Development, full liberalisation of global labour markets, enabling all the world’s workers to migrate to where they can be most efficiently employed, would result in an incredible $40t in world GDP gains. The money is available to whichever country is willing to let people through. It is also a huge boon to the developing world. Remittances, money sent home by migrant workers, totaled some $300b in 2006. Manuel Orozco, an expert on remittances, estimates that 30% of Haiti’s economic wealth comes in the form of remittances. Given that the money is sent to individuals to spend as they see fit, the benefits of remittances far outweigh those of development aid and loans to corrupt governments.

Second, criminalising immigration has proven extremely problematic in the short term. Turning away asylum seekers and economic refugees could lead to more disastrous and widespread conflict, which would, if it grew along with barriers to immigration, spill over into the anti-immigrant rich world. Never mind the Culture Wars; trying to prevent all immigration would mean more of the real kind.

The merciful, logical and even self-interested course for the rich world to take for Haiti or any disaster-struck zone is not to restack the rubble but to let people, rich and poor, come to their countries and begin new lives.

2 Responses to “If you want to help Haiti, open the border”